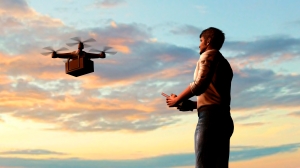 This week, the Federal Aviation Administration (“FAA”) enacted regulations for routine non-recreational use of small Unmanned Aircraft Systems weighing less than 55 pounds or “drone” laws (Part 7 of Federal Aviation Regulations (“FAR”)). For now, this law only applies to commercial operation of drones. However, concerns relating to the operation of drones may require the government to pass laws relating to recreational use of drones in the near future.

The new law requires drones to maintain a visual line-of-sight with the remote pilot in command and the person manipulating the flight controls or the visual observer at all times so that the remote pilot and the visual observer are capable of seeing the drone with vision unaided by any device other than corrective lenses. Drones may not operate over any persons not directly participating in the operation, and also may not operate under a covered structure, and not inside a covered stationary vehicle. Drones can only conduct operations in daylight or civil twilight (30 minutes before official sunrise to 30 minutes after official sunset, local time) with appropriate anti-collision lighting and can only have a maximum groundspeed of 100 mph.

In addition, the new law prohibits drones from carrying hazardous materials. A person may not operate a drone if he or she knows or has reason to know of any physical or mental condition that would interfere with the safe operation of a drone. Also, a person operating a drone must either hold a remote pilot airman certificate, which requires the person to pass a test at an FAA-approved facility, or be under the direct supervision of a person who does hold a remote pilot certificate.

California has also enacted laws at the state level for the regulation of drones. Last year California enacted AB 856, which expanded the definition of physical invasion of privacy under California civil code §1708.8(a) to include “airspace above the land of another person without permission.”  AB 856 was enacted to regulate “paparazzi drones.” Assemblyman Ian Calderon, who wrote the legislation, said that the law was enacted when “we learned that the paparazzi have used drones for years to invade the privacy and capture pictures of public persons in their most private of activities — despite existing law.” It remains to be seen how the new FAA regulations will interact with the existing state laws on drone regulation, however, in general, Part 7 of the FAR appears to compliment AB 856.

Early this year California state legislators proposed another bill, Assembly Bill 1662, in response to an accident when an 11 month old baby was injured in the head by shrapnel from a falling drone at a public movie screening in Pasadena. The proposed Assembly Bill 1662 requires the operator of any drone involved in an accident resulting in injury to an individual or damage to property to immediately land the drone at the nearest location that will not jeopardize the safety of others. The bill also requires the drone operator to present his or her valid identification and his or her name and current residence address to the injured individual or the property owner.