When you think of a monopoly you probably think of Rich Uncle Pennybags or oil tycoon John D. Rockefeller, but maybe you should think of Princess Elsa from Frozen or the iPhone 6 instead.  The largest Hollywood animation studios and leading Silicon Valley giants stand accused of wage-fixing in violation of the Sherman Antitrust Act. While nobody has proven he was the primary architect of these schemes, Steve Jobs of Pixar/Apple appears to be the common denominator between these two industries. 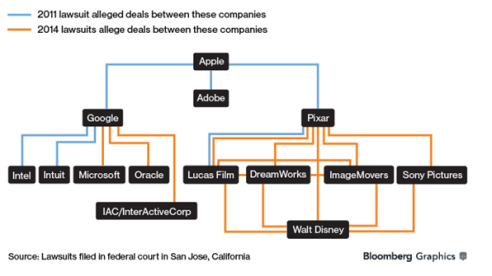 Unlike the typical restraint of trade cases, these Hollywood and Silicon Valley cases involve wage-fixing, not price-fixing. These two industries stand accused of colluding with their competitors not to hire each other’s employees, thereby driving down wages.

The Hollywood class action lawsuit, amended last week, alleges that most of the major animation studios entered secret agreements not to hire one another’s employees. The lawsuit alleges that Pixar, Lucasfilm, DreamWorks Animation, The Walt Disney Company, Sony Pictures, Blue Sky Studios [maker of Rio and Ice Age films], and ImageMovers, LLC, entered into agreements, some of which date back to the 1980’s, “not to actively recruit employees from each other…” While allegations in a complaint should generally be taken with a grain of salt, the studios’ own written documents may prove impossible to explain away. For example in 2005, Pixar’s VP of Human Resources wrote: “With regards to ILM, Sony, Blue Sky, etc., …we have a gentlemen’s agreement not to directly solicit/poach from their employee pool.” In 2007, after Disney acquired Pixar, a Pixar executive wrote a memo to his Disney colleague about “a serious problem brewing” in that Robert Zemeckis [director and creator of Back to the Future and Polar Express] “has hired several people away from Dreamworks at a substantial salary increase” and that the Northern California studios has “avoided wars” by “conscientiously avoiding raiding each other.” Steve Jobs owned the majority share of Pixar prior to the merger.

Meanwhile, in Silicon Valley there are two class actions alleging that Apple, Google, Dell, IBM, eBay, Microsoft, Comcast, Clear Channel, DreamWorks, Oracle, Sun Microsystems and others conspired not to recruit each other’s employees to keep wages down. Similar to the Hollywood case, defendants may find it difficult to overcome their own damning documents. In a Google memo titled “Special Agreement Hiring Policy,” the Google executive listed four Google competitors and explains that they will not “pursue manager level and above candidates for Product, Sales or G&A [General and Administrative] roles –even if they have applied to Google.” Steve Jobs was running Apple during the wage-fixing scheme. The parties in the larger Silicon Valley case reached a settlement of $324 million, but one of the plaintiffs objected that the amount was too low, given that the estimated lost wages was $3 billion and if defendants lose, those damages could be trebled to $9 billion. The Federal District judge agreed and rejected the settlement. The defendants asked the Ninth Circuit to reverse the judge’s decision and have her removed from the case. The parties have filed their initial briefs with the Ninth Circuit

The laws are clear: 1) you cannot conspire with a competitor to fix prices; 2) you cannot conspire with a competitor to fix wages, and 3) you cannot conspire with a competitor not to solicit/hire each other’s workers. These are obvious restraints of trade. But the shocking thing is how arrogant or just plain dumb the defendants were in memorializing their conspiracy in writing. With all the smoking guns, it’s clear the defendants failed to heed Google’s Eric Schmidt’s request that “I would prefer that [Google] do it verbally since I don’t want to create a paper trail over which we can be sued later?” These sophisticated companies committed the same sort of rookie mistake as the Billionaire Boys Club members, who mistakenly left a detailed “to do” list for committing the murder (“tape mouth, handcuff …kill dog”) at the murder site. That smoking gun helped secure their convictions. Similarly, in the wage-fixing class actions, the defendants’ smoking guns are likely to prove insurmountable. Having been caught red handed, the only likely remaining question is how much money the defendants will ultimately have to pay to their employees and the employees’ attorneys. Unfortunately for defendants, it won’t be Monopoly money. 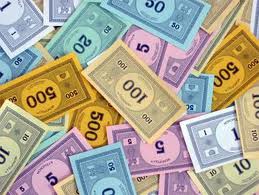