Seems that someone’s always thinking of you, especially if you’re Smokey Robinson and you’re about to reclaim ownership of popular songs you wrote back in the day, like “I Second that Emotion,” “The Tears of a Clown,” “The Tracks of My Tears,” “My Girl” and “You’ve Really Got a Hold on Me.”

Smokey has preemptively filed suit against his ex-wife, Claudette Robinson, asking the court to declare him the sole owner of the copyrights of the songs that he wrote during his marriage with Claudette. According to his complaint, Smokey had previously assigned the rights to his songs to Jobete Music Co., Inc., a music publishing company. When he and Claudette divorced in 1986, the parties agreed to co-own the copyrights 50-50, so they would benefit equally from any proceeds received from the assigned copyrights. 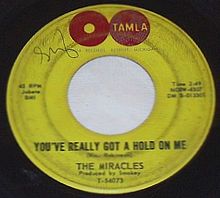 Smokey Robinson’s song became a 1962 Top 10 hit single for the Miracles on the Tamla (Motown) label.

Smokey’s complaint says that once he started sending out termination notices and negotiating with buyers to resell the copyrights, Claudette notified SESAC, Inc., a performing rights organization, that because the parties’ divorce agreement provides that she is a 50% owner of the original copyrights, she was also entitled to 50% when Smokey recaptures those copyrights. As Smokey alleges, Claudette’s potential 50% claim is interfering with Smokey’s efforts to secure new agreements on the recaptured copyrights and is putting a damper on Smokey’s ability to shop his songs around.

How Can You Split Up A Copyright Anyway?

Under the Copyright Act, a copyright can be shared in a few ways. Co-contributors to a particular work, like Lennon and McCartney, may co-own a copyright. Additionally, the Act expressly allows an owner to transfer his or her copyright, “in whole or in part” in many ways – by an agreement, a will, intestate succession, or operation of law.

California courts have interpreted this to mean that the state’s community property laws apply to copyrights. In In re Marriage of Worth, 195 Cal. App. 3d 768 (1987), the Court found that under California community property law, an ex-wife was entitled to 50% of any proceeds her ex-husband author received from his copyright infringement lawsuit for books that he wrote during the marriage. The husband’s copyright was a divisible asset just like anything else upon divorce.

Maybe not, and that’s the issue here. From the complaint, it sounds like Smokey’s attorneys are claiming three things:

1) The “termination right” is completely separate from the copyright itself. According to Smokey’s complaint, unlike the original copyright, which (according to California case law, at least) may be divided upon divorce, the right to terminate an assignment of the copyright is exclusively held by the original author(s), unless the author is no longer living. Furthermore, this right doesn’t have to be exercised. It’s up to the author to decide whether he wants to terminate the assignment.

2) Smokey’s right to terminate the assignments (and therefore “recapture” his copyrights) did not even exist until at least 35 years after he assigned his post-1978 songs, or 56 years after he obtained the original copyright to his pre-1978 songs. Therefore, it was impossible to transfer something that wasn’t in existence at the time he and Claudette divorced in 1985.

3) The copyrights obtained after termination are new copyrights that belong solely to Smokey because he will not have gotten them back until long after the parties’ divorce. These recaptured copyrights are not subject to the parties’ agreement to share the original copyrights 50-50.

So this recapture right essentially lets Smokey get around his prior agreement to share his copyrights 50-50 with Claudette. That doesn’t seem fair.

That’s essentially what Claudette’s attorneys are arguing. Among other things, Claudette’s counter-suit says that she is entitled to 50% of any proceeds Smokey receives by re-selling his recaptured copyrights and claims that Smokey’s failure to tell her about his termination right when they divorced was a breach of his fiduciary duty to her. She alleges that Smokey’s claim to 100% of the recapture rights is an attempt to bypass their 50-50 agreement.

What will the outcome be?

While litigation can be unpredictable, I think the most favorable and likely outcome would be to cut ties once and for all – a settlement of an undisclosed (but large) amount of money to Claudette in exchange for dropping her 50% ownership claim over the recaptured copyrights. Regardless of whether the Copyright Act is on his side, Smokey’s got to be willing to pay some agony (either to Claudette or his attorneys), and Claudette will have to do the leaving if they finally want to be free of each other. For now, she appears to really have a hold on Smokey.